BBC correspondent Sarah has revealed viewers crashed a dog rescue website after an appeal went out to help abandoned animals.

Luckily, BBC viewers were happy to help out the crowded shelter, as a few minutes later the website crashed due to the large number of visitors.

The reporter announced that Dogs 4 Rescue is now at full capacity with 50 dogs looking for new homes.

Speaking to viewers, Sarah said: “They need people to cheer them on, so much so that they say they’re going to pay for absolutely everything.”

“Vet bills, food, just to help keep the cost of living down because that’s why so many dogs have returned.” 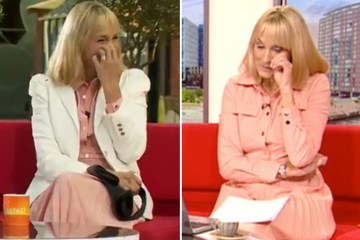 Sarah then introduced the canine residents, Benjy and Stanley, and told them about the centre’s owner, Emma Billington, about the lack of dog homes.

Speaking to Sarah, the centre’s owner, Emma said: “It’s depressing because we set it up to help, and we are no longer able to help.

“I’ve been in this business for almost 20 years, and the UK rescue crisis everywhere is worse than we ever imagined.

“It’s bad enough with Covid but now with the cost of living crisis we’ve never known the number of dogs.

“Literally the phone is ringing all the time, we have automated emails coming out.”

She then told the reporter how desperately they were looking for help.

Emma tells viewers they can get in touch through the Dogs 4 Rescue Facebook page or by calling the number she called, or by visiting the official website.

“I can’t sleep at night,” Emma added. “We can’t help anymore. We are at full capacity, we can’t do anything until people start helping us.

BBC Breakfast airs weekdays from 6am on BBC One.

We pay for your stories!

Do you have a story for The Sun Showbiz team?